Attached is the provisional agenda;  Click here for the attachment.

Polyphonic Music of the Late Middle Ages from England and the Continent. Sources, Context and Court Culture.

The study day was accompanied by the exhibition “Fragments of note: the afterlives of medieval manuscripts” at Magdalen College, Oxford, which examined the numerous medieval manuscript fragments held at Magdalen, largely medieval books that have been dismantled in the early modern period and re-used as binding waste or covers. The main exhibition focused on fragments featuring musical notation and was complemented by a selection of contemporary watercolour, collage, and paper-pulp relief works by fine artist Janet Boulton. The exhibition was co-curated by Dr. Giovanni Varelli (Prize Fellow in Music at Magdalen) and Mr. Daryl Green (Librarian).

Worcester cathedral offers a fascinating window into medieval religious practice and culture. We can still see elements of how monks lived and practised, in the cathedral itself, the cloister and the precincts more widely. Our keynote speaker was Professor David Hiley, acclaimed author of Western Plainchant: A Handbook and Gregorian Chant. This was his inaugural address as incoming President of the Plainsong and Medieval Music Society. Professor Hiley introduced us to some of the ways in which new liturgies were created for English saints during the middle ages, at Worcester and elsewhere.

Worcester cathedral was the original home of some precious witnesses to musical practice in the 13th-14th century. Broken up for use as flyleaves when the repertoire was no longer sung, these “Worcester fragments” were scattered in various archives and libraries. The songs were rediscovered, and their relationship with Worcester uncovered, in the 20th century. Julia Craig-McFeely  introduced us to some of the challenges of digitally restoring manuscript fragments of medieval music, such as the Worcester fragments. Giovanni Varelli introduced us to some of the Worcester fragments that have ended up in Oxford.

The study day was rounded off by a tour of the Cathedral library, with viewings of some of its medieval liturgical and musical holdings, and Evensong sung by the cathedral choir, including some of the Worcester fragment repertoire.

‘Palaeography of Old Hispanic Manuscripts: Music, Text and Beyond’

The Workshop ‘Palaeography of Old Hispanic Manuscripts: Music, Text and Beyond’ was held on 4th May 2017 in the ‘Centre for the Study of the Sociology and Aesthetic of Music’ (CESEM) in Lisbon, Portugal.

Within the wider context of Western sacred music, Old Hispanic Chant is the pre-Gregorian repertory which is preserved most completely and has few Gregorian contaminations. Surviving Old Hispanic musical manuscripts may unveil important information about the Western liturgical chant before the Carolingian reform. However, the complexity deriving from the non-pitched notation of OH manuscripts and the impossibility of transcribing their music into modern score have discouraged scholars from untangling their contents and unveiling their secrets.
Despite their importance, only in recent years have OH musical manuscripts become the object of systematic investigation. The research made in the context of the ‘Old Hispanic Office Project’ at the University of Bristol (http://www.bristol.ac.uk/arts/research/oho-project/) has demonstrated that these neglected manuscripts have the potential to lead to crucial discoveries about medieval music, liturgy, and palaeography.

For more information on the workshop, see Workshop_Palaeography of Old Hispanic Manuscripts Music, Text and Beyond

The art and music of 15th century Norfolk were explored and celebrated at a day long symposium dedicated to the medieval treasures of Ranworth Church.  The church’s famous rood screen and Antiphoner, or service book, was at the centre of the informal conference and singers from Oxford University recreated the vespers, or evening prayers, originally sung by medieval monks. This event was sponsored by PMMS. For more information, see  Ranworth symposium

Music Manuscripts and Their Afterlives 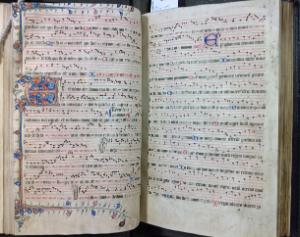 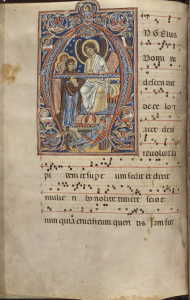 ‘Getting to Grips with Medieval Liturgy Through Primary Sources’

Finding your way around medieval liturgical manuscripts. This session was primarily be aimed at non-specialists from all disciplines, and interested members of the public.

Case studies of selected original manuscripts and early prints of the liturgy. In small groups, experts introduced the participants to some of the treasures of the John Rylands Library – less to present a codicological study of that particular book or books, but in order to explain ‘hands on’ how and by whom and to what purpose the individual sources would have been used within the rite. The groups rotated, so that each participant had the opportunity for a close encounter with each of the objects on display.

On Friday 11th September 2015, at 6pm in Lincoln College Chapel (Turl Street, Oxford), there was a PMMS-sponsored concert, showcasing music that can be associated with the Dominican Order–both friars and nuns.  Sung by a small group of Oxford choral scholars, the programme included Dominican chant, Dominican-composed sequences, Notre-Dame polyphony (used as binding fragments in Dominican books), and trouvere songs compiled by a Dominican.

The concert was part of a wider conference on the Influences of the Dominican Order in the Middle Ages.

The 2015 study day was part of the Senses of Liturgy conference in Bristol. There was a stellar line-up of speakers, and fascinating papers and stimulating discussion. We offered registration discounts for Plainsong and Medieval Music Society members, and bursaries for early career scholars who were presenting a paper.

The Society was proud to support the Medieval-Renaissance Music Conference  at the University of Birmingham. We sponsored the keynote lecture by Professor Ardis Butterfield.

Short talks about and exhibition of British Library manuscripts

There’s no place like Rome: Centres of music and liturgy before 1550

PMMS members are warmly invited to the AGM study day on 10 July 2013, held at Bedern in the city of York. The day will celebrate the Society’s 125th anniversary with a wine reception and free evening concert of conductus by candlelight, two public lectures and a series of papers held in medieval venues in York city centre. The theme of the day is the exploration of centres of music and liturgy before 1550, and will have a good balance of talks on plainchant and polyphony. Speakers include Roger Bowers, Emma Hornby, Rebecca Maloy, Andrew Kirkman, Jim Borders, Thomas Schmidt, Matthew Ward and Hana Vlhová-Wörner.

Registration will be in the region of £50 (non-members) and £35 (members and students). Delegates will be provided with lunch, refreshments, a free ticket to an evening performance at the Merchant Venturer’s Hall and a discounted ticket to a further concert at York Minster, as part of York Early Music Festival. Further details and registration will appear on the PMMS website in the new year. The day will also include the AGM, which is free to attend.

Delegates may like to stay for a few days to enjoy further events at the York Early Music Festival (Friday 5 – Saturday 13 July) and will focus on Rome, with music created under the patronage of medieval Popes, the renaissance polyphony of Palestrina, and the exuberant baroque of Handel in Italy. Special features will include a celebration of the anniversaries of Corelli (1653-1713) and Dowland (1563-1626). Artists will include countertenor Iestyn Davies, one of the world’s foremost viol players Wieland Kuijken, the Italian medieval Ensemble Medusa with singer Patricia Bovi, medievalist Stevie Wishart and her group Sinfonye and Theatre of the Ayre with Elizabeth Kenny and members of the Ukulele Orchestra of Great Britain!

Music and Death before 1650

We are delighted to invite you to the 2012 Conference and Annual General Meeting, to be held in the Faculty of Music, University of Oxford, on 10 March 2012. The fee will be £20/£10 concessions, with free entry for members of the Society.

From Text to Performance: Medieval Vernacular Song in the 21st Century. Centre for Early Music, University of Birmingham, 26 March 2011

I am delighted to invite you to a Plainsong and Medieval Music Society Symposium at the University of Birmingham’s Centre for Early Music Performance & Research.

Issues concerning the performance of medieval vernacular repertoires are central to the symposium. Two of the most distinguished performers of our generation, Benjamin Bagby and John Potter will offer extended presentations that will provide the focal points of the day. There will also be a number of shorter papers to stimulate further discussion on issues in a range of vernacular repertoires, monophonic and polyphonic, up to the middle of the fifteenth century, that will be of interest to performers, editors, scholars (of literature and of music), and others in the early music world.

This year, the Annual General Meeting of the Society will be followed by a day of student papers and presentations, and a round-table discussion on careers in medieval music.

2009 Conference: Nothing new? Understanding newness in medieval and contemporary music

Centre for Research in New Music
University of Huddersfield, 25–26 April 2009

The conference will explore the context of the cathedral institution, institutional change at the time of the Reformation, the provision of Lady Chapels for singers, the adoption of Sarum Use, issues of migration of musicians and repertory, music education, the provenance of key polyphonic sources, and the liturgical timetable of the new-foundation secular cathedrals, with contributions from scholars currently active in this field:

There is no charge for members of the society. Non-members will be asked to pay a fee of £12 on arrival
(students and senior citizens, £6).

The conference will be followed by the Society’s Annual General Meeting at 5.10 pm and by Evensong in Christ Church at 6.00 pm.

10.00 Welcome
10.15 David Lepine: ‘Famous Colleges of Priests’: English Secular Cathedrals c 1450-1560
10.45 Sally Harper: The spread of Sarum Use: the case of Wales, especially St Davids and St Asaph
11.15 Tim Tatton Brown: The provision of Lady Chapels for singers: the case of Salisbury
11.45 Short break
12.00 Anna Burson: Institutional change and music during the mid 16th century at Hereford Cathedral and Worcester Cathedral
12.30 John Harper: The pattern of liturgy and music in the 1540s: Nicholas Heath, the Statutes of the Cathedrals of the New Foundation and his Injunctions for Rochester Cathedral
2.30 Jane Flynn: The Mulliner Book as a record of the education of adolescents in Cathedrals
3.00 Roger Bowers: Caius 667: the choirbook of an early Tudor provincial cathedral?
3.30 Short break
3.45 Magnus Williamson: Issues regarding the migration of musicians and polyphonic repertory
4.15 Discussion leading on from afternoon papers
4.40 Tea
5.00 PMMS AGM
6.00 Evensong in Christ Church, including early 16th century repertory